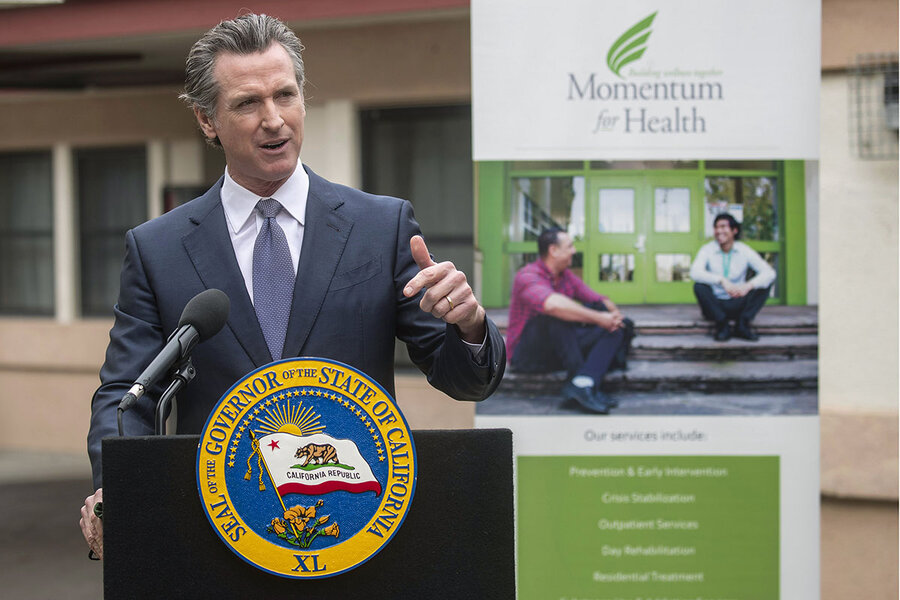 Last month, California Gov. Gavin Newsom signed into law legislation that he described as “transformative” – a new path forward to help people diagnosed with severe mental health and substance abuse disorders, thousands of whom live on the streets. As a sign of the urgent need, the bill passed with only two state lawmakers opposed.

The law creates Care Courts, civil courts that will allow a broad array of interested parties to petition a judge to order treatment. It is meant to reach people with the most serious mental illnesses who don’t have access to care or don’t think they need it, as well as to break the cycle of people shuffling in and out of crisis treatment and jails, which have become America’s de facto mental health institutions. The law’s many supporters hope it will divert people to treatment before they lose their legal autonomy in conservatorship or wind up in jail.

Though the law is touted by the governor’s office as a “first-in-the-nation” framework, behavioral health experts say that the Community Assistance, Recovery, and Empowerment Act actually resembles laws in many other states. It also piggybacks on existing California statutes. As with the other laws, the Care Court’s effectiveness will depend on how well it can be carried out, the experts say. That’s an open question, given expected legal challenges, and an acute shortage of supportive housing and mental health workers, not only in California, but across the nation.

“If well implemented, it would be very significant for the state,” and potentially add momentum to other states’ statutes that are generally known as community-based “assisted outpatient treatment” or “involuntary outpatient commitment” laws, says Marvin Swartz, professor of psychiatry and behavioral sciences at Duke University. Forty-seven states have such statutes, he says. California’s Care Court “twist,” as he calls it, stands out for two reasons: It has funds, and it targets the homeless population, though not exclusively.

“Homeless mentally ill people are a huge problem in California, and a very visible example of the failure of the mental health system. [Governor Newsom] needed to do something bold and new, and sometimes you do that by putting old wine in new bottles,” says Dr. Swartz.

First in the nation for homelessness

California has more homeless people than any other state, at least 170,000 people living in shelters, in vehicles, or outdoors. Californians rank the “big problem” second only to “jobs, the economy, and inflation,” according to the Public Policy Institute in California. Despite billions of dollars spent, homelessness has increased since before the pandemic, and features prominently in midterm elections.

Many factors contribute to homelessness, including mental health and substance abuse disorders. The governor’s office estimates that Care Court will help 7,000 to 12,000 people each year, many of them unhoused.

Pointedly, the governor did not attempt to reform existing paths for people with serious behavioral health issues, such as the state’s conservatorship law, its mental health courts in the criminal court system, and Laura’s Law, which also uses civil courts to order assisted outpatient treatment in local communities. The 20-year-old law is named for Laura Wilcox, a volunteer at a mental health clinic who was shot and killed by a man with mental illness.

Care Courts in every county

“We need to do something different and something better,” said Jason Elliott, a senior counselor to Governor Newsom in a press call proposing the new Care Court tool in March. Unlike the state’s criminal courts for mental health and Laura’s Law, Care Courts are mandatory for each of the state’s 58 counties, which will administer the courts and their services. Also new: Counties will be fined if they don’t comply. Another difference is the broader number of people who can petition Care Courts to hear a case, from family members and roommates to first responders and behavioral health workers.

To qualify for Care Court, individuals must be unlikely to survive safely without supervision or be a threat to themselves or others, and have a diagnosis of schizophrenia spectrum or other psychotic disorders.

The court orders a clinical evaluation of the individual to see if they qualify for a care plan, which could last up to two years and include support services, medication, and housing. The person would have an attorney as well as a volunteer supporter. The participant would have to attend hearings to make sure they are sticking with the plan (though they could refuse medication), and if not, the court could order conservatorship, send them to criminal court, or order hospitalization.

Counties can tap into $15.3 billion of existing state funds dedicated to homelessness – including $11.6 billion for mental health services annually. The law provides $63 million for Care Court planning and startup.

“The lift is significant to actually stand up a program like that,” says Jacqueline Wong-Hernandez, deputy executive director of legislative affairs for the California State Association of Counties. Counties are already stretched, she says. “These are just new people being put into an existing pot of funding, and an existing number of people on the ground, and an existing number of beds in crisis residential treatment.” That’s why the counties insisted on a phased-in approach, with seven of them implementing the law by next October, and the remaining 51 following the year after. At the counties’ insistence, the state must come up with ongoing funding before the law goes into effect.

In Santa Clara County, which does not need to implement the law until the end of 2024, David Mineta is cautiously optimistic about Care Court. As the president and CEO of Momentum for Health, the county’s largest private, nonprofit provider of mental health services, he says he keeps seeing the same patients cycle through jail or crisis care. A certain segment resists treatment, he explains, and many are arrested for infractions due to their illness. When they are released, they miss a court date, or don’t know they have a court date, and are remanded back into custody.

“Their path through our present system has hit a wall. Let’s try this,” he says in a phone interview. He particularly welcomes the civil court path of the new law. “I don’t want to criminalize people for a health condition.”

Help couldn’t come soon enough. At Momentum for Health, the number of clients since the pandemic has surged by 21%. At the same time, the provider faces a severe shortage of mental health workers, having to compete with hospitals and the county, as well as contractors and private practice. Last month, the nonprofit had a 31% vacancy rate for clinicians (therapists). It was twice that for the more intense crisis stabilization unit.

“This is the worst workforce shortage I’ve ever seen for 30-plus years in this field,” says Mr. Mineta. He is “relieved” that the state is focusing on workforce training, providing more than $1.4 billion to boost the overall pipeline for health care and psychiatric providers. To try and fill his workforce gap, Mr. Mineta says he is turning to interns in Ph.D. programs and “peer” workers – people who have lived similar experiences as the clients.

The workforce shortage is a national challenge, with an underlying structural cause related to pay, says Steven Siegel, the Franz Alexander Chair in psychiatry at the Keck School of Medicine at the University of Southern California. The problem, says Dr. Siegel, is that mental health professionals are greatly undervalued compared with their colleagues in physical health, particularly when it comes to insurance reimbursement.

Psychologists make half as much via insurance payments as they do accepting cash in private practice. And psychiatrists, who are fully trained medical doctors, make a third as much as their counterparts in other medical specialties, according to Dr. Siegel.

Luke Bergmann has less than a year to implement the new law. As director of Behavioral Health Services in San Diego County – the largest department in the county with a budget that tops $1 billion – he has to adjust his department to Care Court requirements by the start of next October.

He, too, faces an acute worker shortage: a deficit of 8,000 to 9,000 behavioral health workers in the county just to meet present demand, he says. Add to that the decline in supportive “board and care” long-term housing. “We’ve lost almost half of our board and care in San Diego County since the pandemic,” he says. The reason? The increased cost of housing. “People who own houses are not incentivized to make money with them by providing board and care services.”

Uncertainty around the law is also a challenge. Dr. Bergmann has no idea how the community will respond with referrals to Care Court – will there be an avalanche, a trickle, or something in between? And he’s hearing “conflicting narratives” about the law’s impact. From some quarters, he hears that it will fundamentally transform behavioral health care, amounting to a “tectonic” shift. From others, he understands that the scope of it will be “relatively narrow.”

Right now, he’s trying to figure out what to do with his department’s public conservators office. There might be more demand if people fail to fulfill their Care Court obligations. Or, there might be less demand, if more people go through Care Court and succeed. “Right now, I’m hearing both things.”

The governor’s office describes Care Court as voluntary. But that’s not how civil liberty groups such as the ACLU of Southern California see it.

“Nobody is going to be strapped down and injected with medication against their will,” says Eve Garrow, a policy analyst and advocate with the group. But, she explains, “a court order is compulsory.” And, she adds, there is an enforcement mechanism that can order conservatorship if there is noncompliance. The law is a “pipeline to conservatorship which strips people of almost all of their rights.” She expects legal challenges to Care Court.

The new law is “simply a misdiagnosis of the problem,” according to Ms. Garrow, who cites research that shows court-ordered treatment is no more effective than services received voluntarily. She adds that the real need is more treatment services, supportive housing, and affordable housing.

Looked at more broadly, Care Court is part of a welcome national trend to move away from a criminal court pathway to treatment and toward a health care approach, says Michael Champion, co-chair of the Judges and Psychiatrists Leadership Initiative at the American Psychiatric Association Foundation. “I’m very encouraged right now. We are moving with momentum with broad-based support on this issue,” he says. As for the specifics of Care Court, “time will tell in its implementation.”